Alexa enabled devices can announce when a Blink Motion Notification happens, and respond to Routines that you create in the Alexa app.

Click for information about using Alexa with the Blink Video Doorbell.

This feature is currently available for English language Alexa devices.

Alexa motion announcements are not triggered for the following:

Motion Announcements is an Alexa Routine we made to connect a Blink system to Alexa speech services. When a system is armed, and cameras have the "Motion Recording" setting "On", any motion alerts are sent to Alexa.

Alexa uses the camera name you set in the Blink app to announce the following: "Motion Detected at the <camera name>."

If you tap the alert that appears, a Live View session is started from the camera that sent it.

To receive Alexa spoken alerts as soon as motion is detected by a camera, tap the Camera Settings icon

in the Blink app, then set "Early NotificationBeta" to "On", as shown in the image below.

By default, the motion alert is sent after a motion clip completes recording. If "Motion Recording" is "Off" the clip is zero length, and the alert is sent right away.

You can change the Clip Length, and the pause afterwards (Retrigger Time), in the Camera Settings screen. 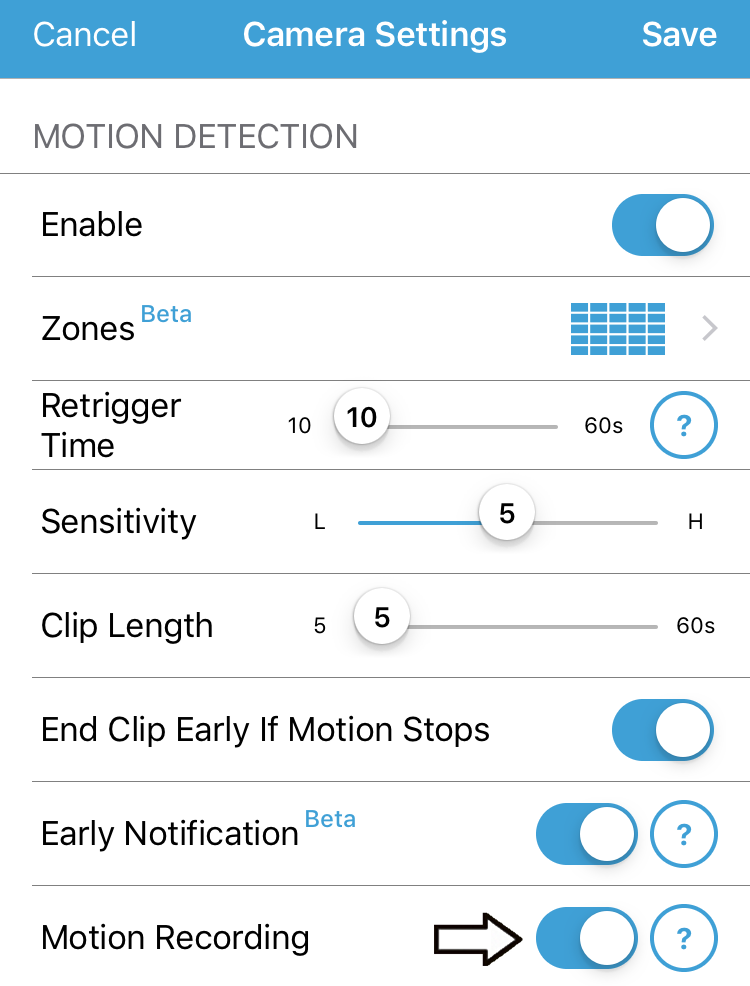 Notice the following are enabled for the best experience:


To receive spoken alerts of camera activity from Alexa

1. Enable the Blink SmartHome Skill in the Alexa app:

Now, when the camera system is armed, motion alerts from the selected camera activate the Alexa device to announce "Motion Detected at the [camera name]." For greater convenience, you can also say: "Alexa, ask Blink to arm the [Blink system name]." You can use the same method to disarm a system when desired. To disarm, Alexa will request the PIN that you created when the Blink SmartHome Skill was enabled and connected to your Blink app.


How to disable Motion Announcements in the Alexa app:

Routine Triggers are currently available for English language Alexa devices in the North American (US and Canada) region.

A Routine Trigger connects your Blink device to Alexa so that motion alerts can start a Routine. Routines consist of an event, and an action to be performed. You choose the device supplying the event (in this case a Blink device), the action to be performed like "Turn on Walkway Lights", a schedule when the action is available ("Today until 11pm"), and the device where the result of the action is sent ("Walkway Lights"). In this way, when motion is detected by a Blink camera, Alexa will turn on the SmartHome lights on the walkway, and it is active until 11pm.

Blink cameras supply the Trigger event through the Blink SmartHome Skill, which must be enabled before you create a Routine. Enable the Blink SmartHome Skill in your Alexa app by following these instructions. Be aware that trigger events are not provided to Alexa when you use Local Storage to record clips directly from camera, or when you have no storage option active.

Blink has already created a useful Routine to announce camera activity. When motion is detected on a properly configured camera, your Alexa device says "Motion detected on the _______ camera." filling in the name of your camera using text to speech. The Motion Announcement Routine is available on the Camera Settings screen of the Alexa app. Learn how to enable Alexa Motion Announcements.

To receive Alexa spoken alerts as soon as motion is detected, rather than after the motion clip recording is complete, set Early Notification to "Enabled" in the Blink app - for each camera that interacts with Alexa.

Attention: To receive motion announcements from Alexa, your Blink Video Doorbell, Outdoor, Indoor (gen 2), and Mini cameras must have the "Motion Recording" Camera Setting in the "On" position. Click to learn about the Motion Recording setting.

To create a Routine Trigger from Blink device activity:

You should see a temporary confirmation banner at the top of the screen confirming actions taken on Routines.

If you followed the example procedure in Step 8, the result of a motion detection is that your chosen Alexa device emits a chime and announces "Someone has entered the front door."

If you instead hear: "Motion Detected at the Mini, Someone has entered the front door." you can deduce that the Motion Announcements feature is active for the camera named "Mini" in addition to the routine that was just created.
Learn more about Motion Announcements here.

How to edit a Routine:


How to disable a Routine:

You should see a confirmation banner at the top of the screen confirming actions taken on Routines.

How to delete a Routine:

You should see a confirmation banner at the top of the screen and be returned to the Routines screen.

Here are four basic examples of possible Routines to get you thinking about how you would like to use this feature.